Wilson's disease is a very rare genetic condition as both parents must carry the defective ATP7B gene to pass it on. If Wilson's disease appears in your family, siblings should be notified. In childhood the disease normally takes a much more aggressive course than when it appears in teenagers and young adults.

In patients with Wilson's disease the breakdown and excretion of copper does not function properly so copper is deposited in various places in the body, such as the liver, brain, kidneys, and corneas. The depositing of copper causes significant damage. Wilson's disease often leads to a reduced life expectancy. The earlier a diagnosis is reached, the better the chances to increase life expectancy and health through treatment.

The symptoms that occur differ depending on the age at which the illness arises. In general the disease is characterised by non-specific symptoms between the ages of 5 and 30 years. Affected children often have inflammation of the liver and/or cirrhosis. In 5% of cases the liver is so severely inflamed that acute liver failure occurs.

In adolescents and young adults the first symptoms are predominantly connected with the central nervous system. These include depression and psychosis, learning difficulties, uncontrolled shaking (tremor), speech and writing problems as well as difficulties swallowing and gait abnormalities. If the brain is affected by copper deposits, a ring around the iris of your eye known as a Kayser-Fleischer ring may be visible. This has a green to brown colour. It usually only appears at an advanced stage of Wilson's disease.

To diagnose the disease, levels of caeruloplasmin and copper in the blood or in urine collected over 24 hours are checked. For a more precise examination, a biopsy of the liver tissue or a genetic test is needed, but this is very difficult because there are hundreds of possible mutations of the ATP7B gene in Wilson's disease. An ophthalmologist might notice a Kayser-Fleischer ring and recommend further investigation.

The treatment for Wilson's disease helps to reduce copper in the body. The drug D-penicillamine as well as trientine (chelating agent) and zinc remove copper from the body.
Since September 1, 2020, the Swiss pharmaceutical company IDEOGEN, has introduced the first Swissmedic-approved, important and life-sustaining drug Triogen® (based on Trientine). In addition, Triogen® is on the Specialty List® and a mandatory benefit of the OKP in Switzerland.
Wilson's patients require lifelong drug treatment. With these drugs, the condition of the liver usually improves and the symptoms get better or disappear. If the treatment does not work, a liver transplant can be life-saving. With a new liver, the breakdown of copper will function normally. 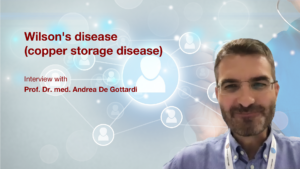 “What is Wilson’s disease?” In this interview, Prof. A. De Gottardi introduces us to Wilson’s disease as a very rare liver disease. Even though only about 200 patients have been identified in Switzerland, the number of people affected with unspecific characteristics is certainly higher. It would also be important if general practitioners were better informed…

“What is Wilson’s disease?” Prof. A. De Gottardi gives us an exciting talk about Wilson’s disease and explains what happens when two gene mutations collide in parents and what the consequences can be for the children. The malfunction of copper excretion can cause liver damage, neurological disorders as well as depression, etc. With today’s drug…