Haemochromatosis is a hereditary disease. The body stores too much iron from food. In the long term, this strains and damages the organs. The liver, joints, pancreas, heart and pituitary gland are most affected. If haemochromatosis progresses undetected, liver cirrhosis can develop which massively increases the risk of liver cancer.

Haemochromatosis is caused by a faulty HFE gene. For haemochromatosis to develop, both parents need to be carriers of the faulty gene. If only one parent has this faulty gene and passes it on to their child, the offspring will not develop the disease but can still pass on the disease to the next generation.

Haemochromatosis often goes undetected due to its mild or non-specific symptoms. It takes many years for a chronic excess of iron to become noticeable in the body. The first signs are tiredness and fatigue as well as upper abdominal pain and joint pain. The liver is the most frequently, and most severely, affected. Diabetes, skin changes, heart problems, erectile dysfunction or missed periods are other further indications.

Phlebotomy (removal of iron) helps to remove the excess iron from the body and is the recommended therapy. If phlebotomy is not an option, there are drugs that can bind to iron and increase the levels of iron excreted from the body. With early diagnosis and treatment, any damage to organs can be prevented and a normal life expectancy is expected.

“What is haemochromatosis?” In this interview, Dr Stanek explains to us this genetically caused iron overload, which can also massively attack the liver. She informs us about the correlations and the interaction as a result of an increased iron concentration in the blood and the good therapy options with early recognition. Genetic tests in the… 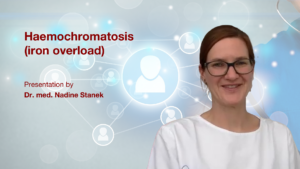 “What is haemochromatosis?” In her presentation, Dr. Stanek describes in detail the genetic predisposition and the interaction of genes in iron overload disease. She shows us what a disturbed iron regulation in the liver can cause. From diagnosis, to symptoms, to risk factors, Dr. Stanek leads us to the various helpful forms of therapy. Genetic…