This form of liver inflammation is triggered by the hepatitis C (HCV) virus. In 20-50% of cases, hepatitis C resolves on its own in the acute phase. In 50-80% of cases it becomes chronic. Untreated, 2-20% of those affected develop cirrhosis of the liver after 20 years and 15-30% after 30 years. Presence of liver cirrhosis increases the risk of developing liver cancer. With the medicines available today, chronic hepatitis C has a good chance of being cured.

Infection occurs via infected blood. Drug users have an especially high risk of becoming infected with HCV if needles are shared. Healthcare staff are at risk of needlestick injuries. Tattoos or piercings performed with non-sterile material also pose a risk. At home, as a safety precaution, avoid sharing sharp objects such as razor blades or toothbrushes with someone infected with HCV.

The risk of a woman with chronic hepatitis C infecting her newborn stands at 5%.

Blood transfusions before 1991 were not tested for HCV and there was therefore a risk of infection then that no longer exists today.

Everyday contact poses no infection risk. HCV is not transmitted via droplets (when coughing or sneezing) or by physical contact such as handshakes or hugs. The same is true even when drinking from the same glass or bottle.

Symptoms are often non-specific if they are present at all. Possible symptoms include fatigue, mild nausea, pale stools, dark urine, flu-like symptoms or fever. In more pronounced cases of acute hepatitis C, the skin or the whites of the eyes may turn yellow. For information on how the symptoms manifest themselves in the cirrhosis stage, see the section on 'Cirrhosis'.

In people with chronic hepatitis C may (but do not always) have other accompanying symptoms that manifest themselves beyond the liver. These are known as extrahepatic manifestations. These include complications like kidney disease, joint and muscle problems and other complaints.

After an incubation period lasting between three and 12 weeks, raised liver values and HCV antibodies (anti-HCV) can be detected in the blood, though the incubation period is often symptom-free. In the case of positive anti-HCV, a test of the genetic material of the virus (HCV-RNA) is performed to confirm HCV infection. This is known as a PCR test.

There are now medicines that can cure the majority of HCV infections. To assess the chance of successful treatment, the viral load is measured - this is the amount of hepatitis C virus in the blood. Hepatitis C is treated as cured when a PCR test carried out 12 weeks after the end of treatment is negative.

The new medications are based on DAAs (direct acting antivirals), the so-called protease, NS5A and polymerase inhibitors. The DAAs directly block replication of HCV. The medications are tablets which are taken daily. Currently in Switzerland, combinations of drugs are available that lead to viral elimination in more than 95% of cases. Two combinations are generally used: either Epclusa (a combination of velpatasvir and sofosbuvir) as one daily tablet for 3 months or Maviret (a combination of glecaprevir and pibrentasvir) as three tablets daily for 2 months. The few patients who do not respond to these treatments can be treated with Vosevi (a combination of voxilaprevir, velpatasvir and sofosbuvir).

“What is HCV?” Prof. Moradpour takes us professionally from the discovery of HCV, through the severe consequences of the disease and the intensive research, to today’s successful drug therapy with tablets. With treatment, the chance of cure today is over 95%. More information: Hepatitis C 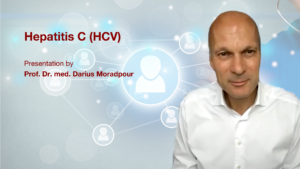 “What is HCV? As a specialist in HCV, Prof. Moradpour expertly presented knowledge, stages of the disease, the great progress in research and the good networking in Switzerland and worldwide on this liver disease. Today, successful drug therapy with tablets can cure over 95% of patients. More Information: Hepatitis C 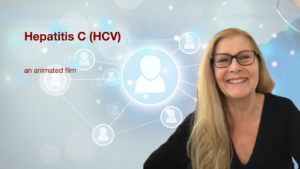 “What is a hepatitis C virus?” This animated film clearly explains the mechanism of the hepatitis C virus and how to protect oneself against it. Today, there are medicines that can almost cure all hepatitis C cases. More information: Hepatitis C