Alcohol and the liver

The liver has many functions but its most important role is detoxifying the body. It is more involved than any other organ in breaking down alcohol in the body. However, it is unable to cleanse more than a certain amount of alcohol from the blood within a specific amount of time. As a result, the remaining alcohol that has not yet been broken down by the liver affects the brain, heart, muscles and other body tissues. Alcohol taken together with medication further increases the strain on the liver.

In cases of excessive alcohol consumption, the normal function of the liver is compromised. The chemical balance of the liver is affected, which leads to liver cell changes or destroys the liver cells. Initially, fat deposits occur (alcoholic fatty liver). This liver condition can still be reversed, and the liver will recover if no more alcohol is consumed. However, if alcohol is not avoided while alcoholic fatty liver is present, the liver can become inflamed (alcoholic hepatitis). Alcoholic hepatitis can either manifest acutely, which is dangerous because it can lead to liver failure, or the inflammation can become chronic, leading to liver scarring and eventually to cirrhosis.

Blood tests are used to measure liver values and, if recent consumption is suspected, an alcohol test is performed. Gamma-GT detected in the blood may indicate increased liver activity, but is not by itself evidence of alcohol consumption. With heavy alcohol consumption, CDT is elevated in the blood, but elevated levels can also be found in a number of other conditions. Raised levels, however, may have other causes. Taking a detailed history and observing the patient are also central to the diagnosis.

Particularly in the early stages, and in fact even when alcoholic fatty liver has developed, the liver can still recover completely. For this to happen, the affected person must abstain from alcohol completely. For serious liver damage (e.g. cirrhosis) caused by alcohol consumption, a complete cure is difficult even if alcohol is abstained from. However, the further course of the disease is greatly slowed if drinking is stopped. The consequences of cirrhosis can lead to death. 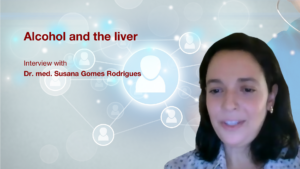 With her sympathetic nature, Dr. Rodrigues informs about the “taboo subject” – alcohol and the liver -. In an uncomplicated way, she shows us coherences, risks and treatment options. It is important to her that there is a healthy basis of trust between the doctor and patient, because this is how the greatest treatment successes…

Alcohol and the liver – a stigma in our society – and yet we are all confronted with it in our everyday lives. Dr. Rodrigues takes us step by step in her patient-friendly, scientifically sound educational process. She also shows us that we can help decisively through personal responsibility. Together we are strong! More about…