Drug-induced liver disease (DILI) is relatively rare; for most drugs, relevant liver damage occurs in just one in every 10,000 to 100,000 people taking the drug. However, this number is likely to be a low estimate as some cases are likely to be undetected. Recent population-based studies have shown an incidence of liver damage from drugs in 14 or 19 per 100,000 inhabitants each year. There are two fundamentally different mechanisms of injury that can lead to DILI. On the one hand, direct toxicity due to an excessive dose of the drug, and on the other hand, damage due to drug hypersensitivity (idiosyncratic reaction) - the latter is much more common. The most common medicine that can lead to injury at a high dose is paracetamol (acetaminophen). If an overdose is taken, acute liver failure can occur in a short period of time (a few days). Drug hypersensitivity ranges from a mild elevation of liver enzymes, which may not cause the patient any discomfort, to severe hepatitis with yellowing of the eyes and skin, which may result in liver failure. The latency period, the time between the start of the drug intake and the onset of DILI, can last several weeks to months, or even years in some cases. In some cases liver injury as a result of drug hypersensitivity is associated with allergic symptoms.

The most common triggers for DILI as a result of drug sensitivity reactions are antibiotics and NSAIDs (e.g. ibuprogen, diclofenac). However, herbal remedies and nutritional supplements can also cause DILI. It is therefore crucial to inform your doctor about all medications and supplements. Diagnosis of drug-induced liver injury is not easy to make; many other liver diseases, like viral hepatitis, must be ruled out first. There is no laboratory test that can detect liver damage caused by a specific drug.

If one of the following symptoms arises during treatment with a particular drug, inform your doctor. Loss of appetite, fatigue, weight loss, nausea, vomiting, fever, pain in the upper abdomen, joint pain, muscle ache, itching, reddening of the skin, jaundice, pale stools or dark urine. In some cases allergic symptoms like hives and swollen lymph nodes can occur. In very severe cases, when liver failure occurs, a person may experience confusion or a coma.

Drug-induced liver injury as a result of a hypersensitivity reaction usually occurs at a normal dose, and does not require an overdose. It is very difficult to predict whether drug-induced injury will occur because many different factors (drug factors, environmental factors, genetic factors) play a role. The immune system appears to be of great importance in these drug reactions. If you experience any of the above symptoms after taking a new drug, you should notify your doctor.

Conversely, in cases of direct toxicity, the size of the dose is important. An overdose of the painkiller paracetamol can lead to the development of acute liver failure within days. In malnourished patients or those with an alcohol dependency, even a normal dose can lead to liver failure.

As a general rule, it is advisable to read the instruction leaflet of the medicine carefully. This will include notes on consumption and dosing. Whether interactions can occur when taking several medications should be clarified with your doctor (this also applies to natural remedies). It is important for at least one doctor to be aware of all of your medications.

In most cases, stopping the medication in question is the most suitable treatment. The faster the symptoms are reacted to, the better. However, medications should only be discontinued after consulting a doctor; this is especially true for important medications such as blood pressure drugs or antiepileptics. In most cases, the illness resolves spontaneously after stopping the drugs. A healthy lifestyle, including abstaining from alcohol, is always beneficial. In the event of an overdose, urgently seek treatment at the closest hospital. In the case of poisoning by an overdose of paracetamol, the drug N-acetylcysteine must be administered quickly via the vein, and inpatient treatment and monitoring are required. In the case of acute liver failure, liver transplantation may be necessary in rare cases. 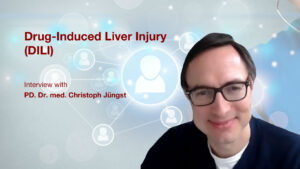 “What is drug-induced liver injury (DILI)?” DILI is rare, but more common than thought, as more and more studies show, Dr Jüngst confirms to us. Key for the right therapy are diagnosis, exclusion diagnosis, the DILI – prognosis (e.g. by Hy’s Law) and the determination of risk factors. It is recommended to first discuss a corresponding notification to Swissmedic with the attending physician. 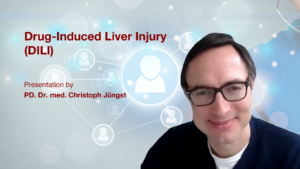 “What is drug-induced liver injury (DILI)?” Dr Jüngst distinguishes between two categories of DILI, namely overdose and hypersensitivity reactions. Frequency and severe symptoms further indicate the importance of good consultation with the GP and personal responsibility with medications.